Oswald of Northumbria in a 13th-century manuscript

The English king Aethelfrith of Bernicia was slain in battle in 616 or 617. His defeat allowed his rival, Prince Edwin, to replace him as overking of Northumbria. Edwin’s ancestral kingdom was Deira, the southern part of Northumbria, but he quickly seized power in Bernicia and drove Aethelfrith’s family into exile.

Aethelfrith’s children sought sanctuary among the Celtic peoples of the North. One son, Eanfrith, came to the Picts, while other siblings found refuge with the Scots. At that time, the ethnic label ‘Scots’ applied to a number of Gaelic-speaking groups in mainland Argyll and the Inner Hebrides. They were divided into various small kingdoms, each dominated by one or more high-status families known as cenéla. Together these kingdoms comprised a region or overkingdom called Dál Riata, which included most of Argyll together with part of northern Ireland. One of the most powerful cenéla ruled the long peninsula of Kintyre. Its members claimed descent from Gabrán, an earlier king who lived around the middle of the sixth century. At the time of Aethelfrith’s defeat, this family was starting to call itself Cenél nGabráin, ‘Gabrán’s Descendants’. Its king was Eochaid Buide (‘Yellow’ or ‘Blond’ Eochaid), a grandson of Gabrán, and it was to him that the young Bernician princes and princesses came seeking shelter and protection. 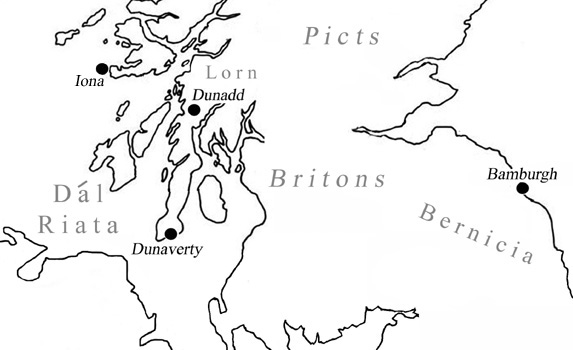 Among the English exiles was Oswald, a boy of eleven or twelve when he arrived in Dál Riata. Seventeen years later, he would return to his homeland to reclaim his father’s kingship. In the meantime, he dwelt among the Scots as an honoured guest of King Eochaid. He became a Christian and learned the Gaelic language. In his teens he probably repaid his foster-father’s hospitality by fighting as a Cenél nGabráin warrior. He may have travelled extensively throughout Eochaid’s domains, not only on military ventures but also as a member of the king’s entourage on visits to outlying districts. As a high-status Christian convert he most likely visited the monastery of Iona on more than one occasion. But where else did he reside during these years of exile?

Like many early medieval kings, Eochaid Buide would have maintained several residences in different parts of his kingdom. He and his family, together with their entourage of friends, priests, servants and bodyguards, would have used these places at particular times of the year, such as Easter and Christmas, or during periodic tours of the lands under his authority. Some residences served specific purposes as ceremonial venues where the king’s vassal-lords offered homage and tribute. Others had sacred or religious significance, or were associated with revered ancestors of the royal dynasty. One place that seems to fall into this second category was an imposing sea-girt fortress at the southern tip of Kintyre. On modern maps it is usually marked as the site of Dunaverty Castle.

Few traces of the castle now remain. It was occupied in medieval times as a stronghold of the Macdonalds and was the scene of an infamous massacre in the 17th century. Like many coastal promontory fortresses it was built in a commanding position on top of a great mass of rock. At Dunaverty this bulky foundation has a strange, irregular shape that makes it particularly distinctive, especially when viewed from a distance. Memories of the massacre of 1647 were slow to fade and the site is still known as the Rock of Blood.

Dunaverty: view from the west.

The slaughter of 300 members of Clan Donald was the grim climax in a siege by Cromwellian forces led by General Leslie. It was the last of a number of assaults dating back to the 13th century, when an Anglo-Norman lord, an ancestor of Clan Bissett, seized the castle during the reign of the Scottish king Alexander II (1214-49). Five hundred years before Alexander succeeded to the throne, the Irish annals noted the first recorded attack on Dunaverty:

Selbach was an ambitious Gaelic king whose core domains lay in Lorn, the district around present-day Oban. He belonged to Cenél Loairn, a powerful family who competed with Cenél nGabráin for the overkingship of Dál Riata in the late seventh and early eighth centuries. In 712 he attacked and burned the Cenél nGabráin fortress at Tarbert in central Kintyre before laying siege to Aberte. Although the annalists tell us little about the geography of these campaigns there is little doubt that Aberte was an ancient stronghold on the rock of Dunaverty. The latter name is an Anglicised form of Gaelic Dun Abhartaigh, ‘Abhartach’s Fort’. In the 8th century this would have been written as Dun Abartaig.

Dunaverty: modern buildings on the slipway below the Rock.

A little further along the shore, but still within sight of watchers on the Rock of Blood, lies a place called Keil Point. The caves in the cliffs behind are signposted as a tourist attraction, as are the nearby ruins of St Columba’s Chapel. On a small outcrop next to the chapel two shallow footprints have been carefully carved in the stone. They are known today as ‘St Columba’s Footprints’ and, like the caves, are regularly visited by tourists. One carving is relatively modern, having been made in the 19th century, but the other is much older. The outcrop was almost certainly used in past times as a sacred place of inauguration. A new king or chieftain would have placed his foot in the ancient footprint to signify his bond with the land. A similar, more famous footprint can be seen on the summit of Dunadd, a hillfort situated somewhat north of Kintyre on the road to Oban. In the early eighth century, when Selbach and his sons stood at the height of their power, Dunadd was one of the main strongholds of their family. It is likely that the footprint on the summit was used in Selbach’s inauguration ceremony when he became king of Cenél Loairn (c.701) and likewise by his son Dungal in 723. The footprint at Keil Point in southern Kintyre surely served the same ceremonial purpose for the kings of Cenél nGabráin. If so, then the nearby fortress of Dun Abartaig was probably their main centre of power. 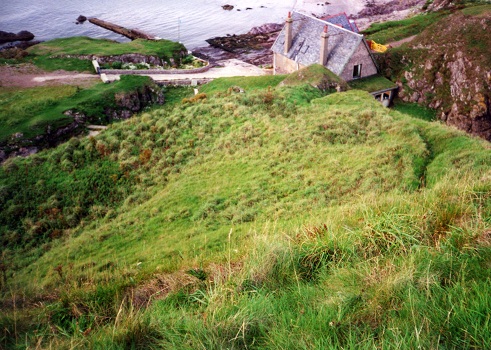 Dunaverty: view from the summit, looking towards the slipway. 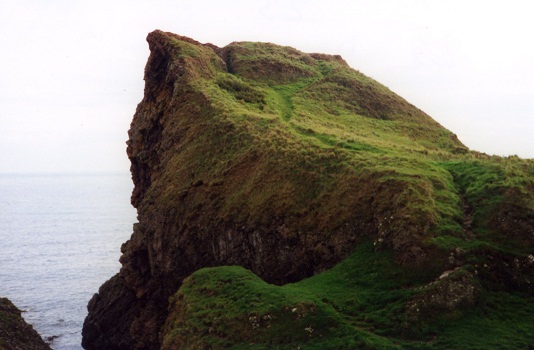 The summit of the Rock, viewed from the northeast.

The photographs accompanying this post were taken ten years ago during a holiday in Kintyre. They give an idea of the impressive setting of ancient Dun Abartaig and the castle that succeeded it. As with many centres of power in early medieval Scotland the habitable area on the summit is fairly small but to me there seems little doubt that this is one of the places where the young Prince Oswald lived among his Cenél nGabráin foster-kin. It might even have been the royal residence he and his siblings regarded as their main ‘home’ during the long years of exile from Bernicia.

* The identification of Aberte as Dunaverty is usually credited to William Reeves in his edition of Adomnán’s Life of St Columba (Dublin, 1857). It was supported by W.F. Skene later in the same century, by Alan Orr Anderson in 1922, by the place-name scholar William Watson in 1926 and, more recently, by James Fraser in 2009 (to name but four).

* On Oswald’s exile see two articles by Michelle Ziegler in The Heroic Age: The Politics of Exile in Early Northumbria and Oswald and the Irish. Michelle has also posted a useful Oswald bibliography at her Heavenfield blog.

11 comments on “Oswald and the Rock of Blood”