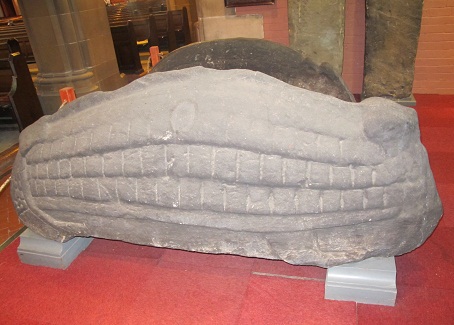 The Riverside Museum, Glasgow’s new museum of transport, opened on the north bank of the Clyde at the end of June. I haven’t been there yet, but it looks to be a state-of-the-art attraction and well worth a visit. In its first three weeks it attracted 210,000 visitors – a quarter of the total number anticipated for the entire first year.

This is all good news for the carved stones of the Kingdom of Strathclyde. The main collection of these fascinating monuments is housed in the old parish church at Govan, known as ‘Govan Old’, directly across the river from the new transport museum. A regular ferry service now operates between the museum and Water Row, a street in Govan, which is only a short walk from the church. The good folk at the museum are doing their bit to make visitors aware of the unique collection of Celtic sculpture on the other side. They’ve installed signboards inviting people to look across at Govan Old, a Victorian structure on the site of the main religious and ceremonial centre of the Strathclyde kings. In fact, they’ve even made a replica of one of the imposing hogback tombstones which are Govan’s best-known – and most enigmatic – early medieval relics.

The Govan collection is an impressive reminder of the role played by the North Britons in early Scottish history. The sculptural style represents the artistic tradition of a long-vanished kingdom that had its own language and culture. Sadly, despite their archaeological importance, the stones don’t have a correspondingly high profile in today’s tourism and ‘heritage’ sectors. They are far less well-known, for instance, than their Pictish counterparts, even though both sculptural styles have much in common. The Strathclyde carvers were certainly influenced by what they saw on Pictish stones, yet this important link does not seem to be widely known. Hopefully, things will start to change with the opening of the Riverside Museum across the Clyde, and with the old parish church being the subject of a consultation exercise regarding its future use and management. We may yet see Govan Old take its rightful place alongside the Pictish museums at Meigle and Rosemarkie as a famed repository of Celtic sculpture.

A view of Govan Old from the Riverside Museum, and close-ups of the signboards, can be seen in these pictures at Tweetdeck.

The early medieval sculpture at Govan is the main topic at my other blog Heart of the Kingdom.