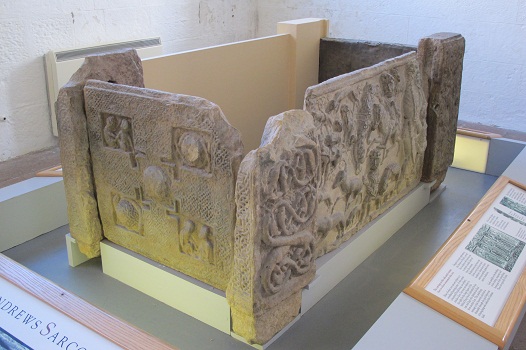 In 1833, during the digging of a grave in the cemetery of St Andrews Cathedral, several pieces of sculptured stone were unearthed. It soon became clear that these were the broken remains of what had once been an ancient coffin or sarcophagus. Some parts were missing and have not been found but the surviving fragments have been reassembled to show what the original sarcophagus looked like. This assemblage can be seen today in the museum in the Cathedral grounds. It is one of the most impressive of all Pictish monuments.

Only one of the long side-panels, three of the four cornerstones and one end-panel are complete. The sarcophagus originally had a stone lid but this, too, is missing. Fortunately, the figures carved on the surviving side-panel give us an important clue as to what the monument was for. 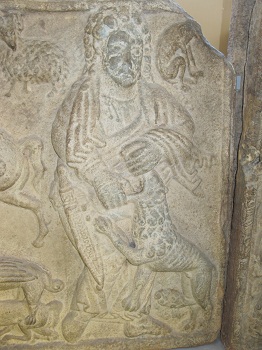 This is the largest of the carved figures. It represents the Israelite king David, a ruler regarded in early medieval times as a role-model for Christian kingship. He is killing a lion by pulling its jaws apart, a motif seen also in Irish and Anglo-Saxon sculpture. This image suggests that the Sarcophagus was connected with royalty and, more specifically, that it commemorated a particular Pictish king. Here, the face of David might represent this king, like a portrait in stone. 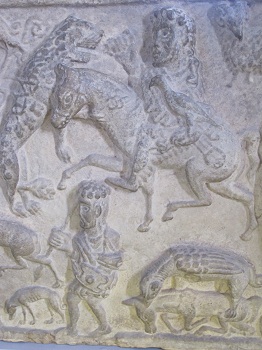 This figure is a mounted huntsman accompanied by hounds. He is tackling a ferocious beast that rears up at him on its hind legs. Below him is a man on foot armed with a spear and shield. Stags and other animals fill the remaining space on the panel. It is possible that this rider, rather than David, represents the Pictish king.

Whom did the Sarcophagus commemorate? Although this question cannot be answered with certainty, the sculptural style suggests a probable date and a likely candidate. Archaeologists and art-historians have deduced that the monument was carved between 750 and 850. It was clearly meant to be seen and admired rather than buried in the earth. There can be little doubt that it was displayed in a prominent position in a church or chapel where people could walk around it to fully appreciate its craftsmanship. Being primarily a richly decorated coffin or ‘tomb shrine’ it would have contained the mortal remains of an important person, someone who had connections with Pictish royalty and with the monastery at St Andrews. An old legend identifies the founder of the monastery as a king called ‘Hungus’ whose name in the Pictish language would be Onuist or Unuist (Gaelic: Oengus). This name was borne by two kings, either of whom might be the ‘Hungus’ of the legend. One died in 761, the other in 834. Both were sons of fathers called Uurguist (Gaelic: Fergus) The more famous of the two Onuists was the earlier, a mighty warlord who dominated North Britain in the middle of the 8th century. He is one of the most famous of all Pictish kings, his greatest achievement being the conquest of Dál Riata, the land of the Scots. Having achieved many great victories he certainly fits the martial image of David the lion-slayer. It is possible, or even probable, that the St Andrews Sarcophagus was his tomb. 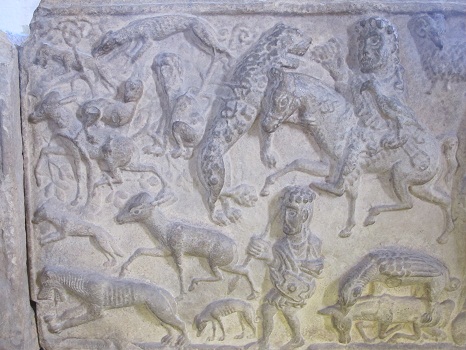 The hunting scene (Photo © B Keeling)

The St Andrews Sarcophagus: a Pictish Masterpiece and its International Connections, edited by Sally M. Foster (Dublin: Four Courts Press, 1998) [a collection of studies by eminent historians and archaeologists] 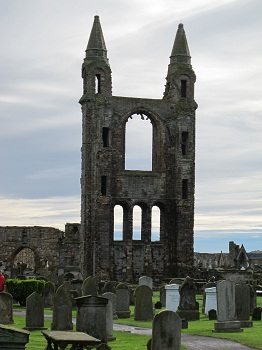 13 comments on “The St Andrews Sarcophagus”