Last week saw the official unveiling of the Govan Stones in their new positions, following a major project to improve their display and interpretation. This stunning collection of early medieval sculpture has now re-opened for the summer season and can be visited free of charge. The 31 monuments include the magnificent Govan Sarcophagus, carved from a single block of sandstone and depicting a hunting scene reminiscent of Pictish examples. Similarly impressive are five hogback gravestones – traditionally associated with the Vikings – and the enigmatic Sun Stone.

What makes the Govan collection unique is that it represents the stonecarving tradition of the Strathclyde Britons, a people whose role in Scottish history is frequently overlooked. The Britons are less well-known, for instance, than their Pictish neighbours, despite playing an equally important part in the shaping of medieval Scotland. Govan was a major religious and ceremonial centre for the kings of Strathclyde at the height of their power in the 9th-11th centuries. 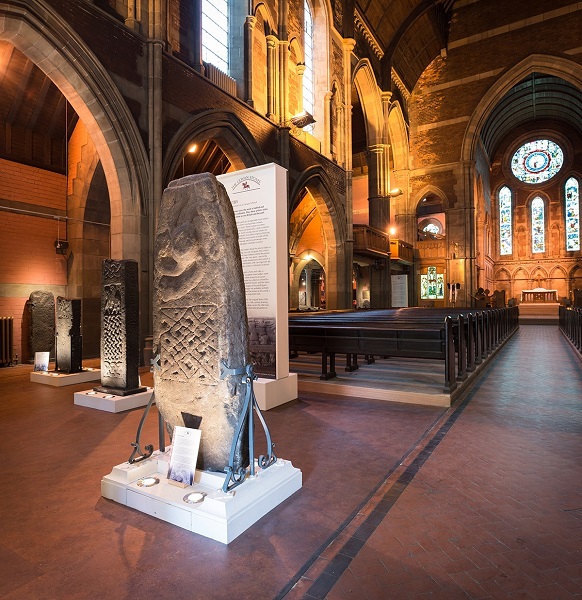 This fine assemblage of ‘Dark Age’ Celtic sculpture is housed in the old parish church (known as Govan Old) on the south bank of the River Clyde. The church, which occupies a site of Christian worship reaching back to the fifth century, sits in a distinctive heart-shaped graveyard. It is easily accessible to visitors arriving by car or public transport, or on foot from the Riverside Museum on the opposite shore (via a free ferry service running until 11 August 2013). A selection of books and leaflets can be purchased inside the church, and guided tours of the sculpture are available. Refreshments can be found nearby in the excellent Cafe 13 which has recently moved to a new location at Govan Cross, just across the road from the subway station.

So, if you’re visiting Glasgow in the next couple of months, or simply passing through the south side of the city with a few hours to spare, make a short detour and visit the old parish church beside the river. If you’re an admirer of Celtic art and ancient carved stones, and you’re planning a trip to Scotland this summer, be sure to add the Govan collection to your ‘must see’ list.

Many thanks to Tom Manley for permission to use his brilliant photographs, which can also be seen in this gallery at his website.

3 comments on “Visit the Govan Stones”