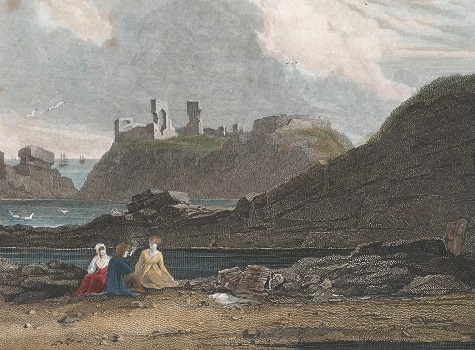 The image above is from the early nineteenth century. It’s an engraving by John Greig (from a drawing by Luke Clennell) and was published as a plate illustration in Sir Walter Scott’s The Border Antiquities of England and Scotland. A number of prints were made from the original and some of these were hand-coloured by later artists. I recently found one of the coloured versions, neatly mounted on white card, in a car boot sale at Falkirk Football Club.

The picture gives a clear impression of the great mass of rock upon which the Scottish earls of Dunbar built their castle, a structure now so ruinous as to be deemed too dangerous for the public. To the left of the castle – but not shown in the engraving – is the headland known as Castle Park where archaeological excavations in the late 1980s and early 1990s revealed traces of an ancient promontory fort. This older stronghold was occupied as far back as the Iron Age and continued to be used in early medieval times as an important centre of power. Originally a fortress of the native Britons, it was taken over by the Anglo-Saxons in the seventh century when its name was recorded as Dynbaer (from Brittonic din+bar, ‘summit fort’). In the ninth century it was attacked by the Pictish king Cináed mac Ailpín (Kenneth MacAlpine) and eventually became part of the kingdom of Alba in the time of Cináed’s descendants. The site of the fortress is now occupied by a leisure centre.

Much of the history of Dunbar’s medieval castle falls outside the remit of this blog but is well worth a look, especially by anyone with an interest in the Anglo-Scottish wars. The castle’s most famous resident was the formidable Black Agnes, wife of the 9th earl, who successfully resisted an English siege in the fourteenth century.

The Canmore record for Castle Park can be found at the RCAHMS website.