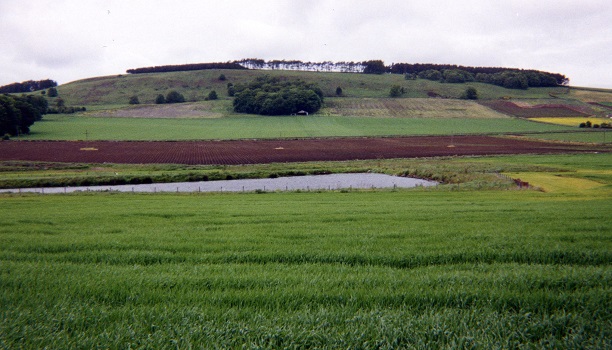 On 20 May 685, at Dun Nechtáin (‘Nechtan’s Fortress’), an English army from Northumbria was massacred while advancing deep into Pictish territory. As well as being associated with a fortification, the battle was also close to an area of wetland known as Linn Garan (‘Heron Pool’ in the ancient Brittonic language of the Picts) and as Nechtanesmere (Old English: ‘Nechtan’s Mire’).

The location of the battlefield is a matter of debate. Some historians place it near Dunnichen Hill in Angus; others look further north to Dunachton in Badenoch. My own preference is for the Angus site, although I continue to keep an open mind.

Many years ago, while reading Graeme Cruickshank’s 1991 booklet on the battle, I encountered an intriguing tale, a sort of Pictish ghost-story. This told of a strange apparition allegedly seen by Miss E.F. Smith, a resident of the village of Letham, after her car skidded off the road on a dark night in January 1950. According to Miss Smith, she left her vehicle in a ditch and began the 8-mile walk home, taking a route along unlit country roads. Eventually, just before 2.00am, she drew near the outskirts of Letham and saw the black shape of Dunnichen Hill looming ahead. It was then that she noticed shadowy lights moving in nearby farmland. These gradually became clear, to be revealed as flaming torches held by a group of figures clad in what seemed to be medieval garb. Miss Smith glimpsed another group of torch-bearing figures in a field some distance away, and finally a third group near some farm buildings. As she watched, she saw members of the third group periodically stooping to the ground to inspect dead bodies lying face-down on the grass, turning them over as if to identify them. Continuing on her way, she left the figures behind in the darkness and soon reached the safety of her home.

More than 20 years later, Miss Smith’s strange encounter came to the attention of Dr James McHarg, a member of the Society of Psychical Research, who interviewed her in 1971. Dr McHarg gave cautious credence to the genuineness of her tale, partly because he did not think her the kind of person who would make it up. Miss Smith did, however, admit to knowing – before the alleged sighting took place – that the battle was believed by many local folk to have been fought near Dunnichen Hill. Also, she had subsequently acquired further information from an academic article written by the renowned archaeologist Frederick Threlfall Wainwright.

So, what really did happen on that January night 65 years ago? Did Miss Smith gaze straight back through the centuries to the grim battlefield of Nechtanesmere? Did she really see Pictish warriors conducting a solemn search for their dead comrades? Or did the darkness and the cold, together with the alcohol she had consumed at a cocktail party in Brechin, cause her to hallucinate on the long walk home?

We will probably never know, but it makes a good tale nonetheless.

I was reminded of this story a couple of weeks ago when the Picts Facebook page posted a link to a blogpost written by Mike Dash in 2010: ‘A Scottish spinster at the Battle of Nechtanesmere, 685 AD’. As with much of the information I find online these days, my initial source was Twitter – in this instance, a tweet by Debra Torrance (@FewArePict) on 4th March 2015.

Alex Woolf, ‘Dun Nechtáin, Fortriu and the Geography of the Picts’ Scottish Historical Review 85 (2006), 182-201. [Woolf suggests Dunachton, not Dunnichen, as the site of the battle]

11 comments on “Ghosts of Nechtanesmere”