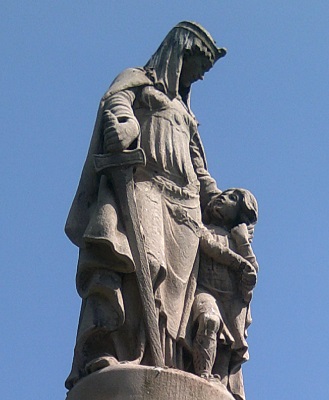 Aethelflaed of Mercia with her young nephew Athelstan (a modern sculpture at Tamworth Castle).

Today is the 1097th anniversary of the death of my favourite individual from the Dark Ages.

I refer, of course, to the Anglo-Saxon princess Aethelflaed, the Lady of the Mercians. She was the daughter of Alfred the Great, king of Wessex, and sister to his successor Edward the Elder.

Aethelflaed married Aethelred, the ruler of Mercia in the western midlands of England, and joined him in a programme of fortress-building that strengthened his people’s defences against Viking raids. After Aethelred died in 911, his widow became sole ruler and – unusually for a woman in those times – a commander of armies in the field. She led military campaigns in person and achieved several major victories. Working in tandem with her brother Edward, she not only held off the Viking menace but won back a number of conquered territories in eastern England.

As part of her wider anti-Viking strategy, she formed a three-way alliance with the kings of Alba and Strathclyde. This northern and Scottish dimension is one of the reasons why I have long been fascinated by her career. Another reason is her connection with Mercia, my homeland, which she governed and protected during a time of great peril and uncertainty.

She died on 12 June 918, at the ancient Mercian settlement of Tamworth.

I’ve mentioned Aethelflaed here at Senchus quite a few times and, six years ago, devoted a blogpost to her. Last year I wrote about her again, at one of my other blogs. Here are the links to those posts…
‘The Lady of the Mercians’ [Senchus blog, 2009]
‘Aethelflaed’ [Strathclyde blog, 2014]

Her alliance with the Scots and Strathclyde Britons is described in a medieval text known as The Fragmentary Annals of Ireland. The passage in question gives an idea of the high regard in which she was held by contemporaries in lands far beyond the borders of Mercia. The relevant passage, with an English translation, can be seen in my blogpost on the Fragmentary Annals.

I also recommend Susan Abernethy’s article ‘Aethelflaed, Lady of Mercia’ and Ed Watson’s ‘Aethelflaed: the making of a county town’.

I discuss Aethelflaed and her relations with the northern kings in my book Strathclyde and the Anglo-Saxons in the Viking Age (on pages 58-63).