The River Add from the summit of Dunadd (Photo © T Clarkson)

Many readers of this blog will be familiar with the hillfort of Dunadd. Some of you will have walked up the stony path to the famous carved footprint on the summit. It’s an enthralling place, with great views from the top and a rich aura of history all around. I’ve been there a couple of times, though my last visit was at least ten years ago.

Today I’m writing about Dunadd because I’ve recently been reminded of why it’s one of my favourite Dark Age sites. The reminder came in an article by Jo Woolf, over at her website The Hazel Tree. Jo’s reports on her visits to historic places always capture the essence and atmosphere, and her article on Dunadd is no exception. It’s worth checking out for the photographs too, which give a virtual tour of the hill and the surrounding landscape.

Jo refers to Dunadd’s importance as a place of ritual where early Scottish kings were inaugurated. She writes about the footprint, which would have played a central role in the royal ceremonies, noting that the original carving lies protected beneath a modern replica. She also mentions the carved image of a boar, which is often identified as Pictish. In AD 736, as Jo observes, an army of Picts attacked Dunadd during a major war with the Scots. At that time, the main territory of the Scots was Dál Riata, a region comprising much of Argyll and the Isles. The later kingdom of Scotland lay a couple of hundred years in the future. 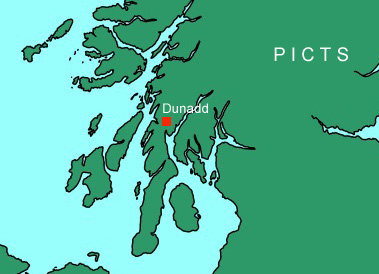 The Pictish army in 736 was led by Óengus, the mightiest warlord in northern Britain. His main enemies in Dál Riata belonged to a royal family known as Cenél Loairn (‘Descendants of Loarn’) whose name still survives in the district of Lorn around the town of Oban. This family was at the height of its power in the early eighth century and probably used Dunadd as a major stronghold. The fortress was no doubt a key target for Óengus, whose attack upon it was noted by contemporary annalists. The record in question, written in Latin, is preserved in the Annals of Ulster:

Not only was the fall of Dunadd a massive setback for Cenél Loairn, the capture of Selbach’s sons deprived the family of two prominent military leaders. Óengus pressed home his advantage and, within a few years, had imposed his authority throughout Dál Riata, establishing a Pictish overlordship in the heartland of the Scots. This was not the end of the story: archaeological evidence suggests that Dunadd remained in use, at least into the early 800s. By then, however, the presence of Viking raiders in the western seaways was already putting pressure on the Scots, prompting some of their leading families to migrate eastward into Pictish territory. In such circumstances, Dunadd is unlikely to have retained its status as a crowning-place of kings.

Click the link below to go to Jo Woolf’s blogpost.