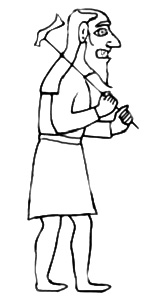 This month, a team of archaeologists is hoping to shed light on an ancient carving known as Rhynie Man. This mysterious figure, carrying an axe over his shoulder, appears on a slab of stone more than six feet high. The slab was found in 1978, on a field in the Aberdeenshire village of Rhynie, near the site of a major Pictish fortress.

The archaeologists are currently excavating in the area, to see if anything can be learned of Rhynie Man’s original location and purpose. One possibility is that his stone was placed near the entrance of the fort – an entirely plausible setting for such an imposing image. The shape of his axe suggests a connection with sacrificial rites, so perhaps he represents a pagan priest of the sort who no doubt performed important ceremonies for the fort’s high-status occupants. This would fit with the pre-Christian context of the carving, which has been dated to c.500 AD, a hundred years before Pictish paganism began to retreat in the face of missionary activity from Iona and elsewhere.

I’m starting to wonder if Rhynie Man might even be a ‘Pictish druid’ like the ones encountered by St Columba near Inverness in the late sixth century.

The links below give further information about the archaeological excavation.