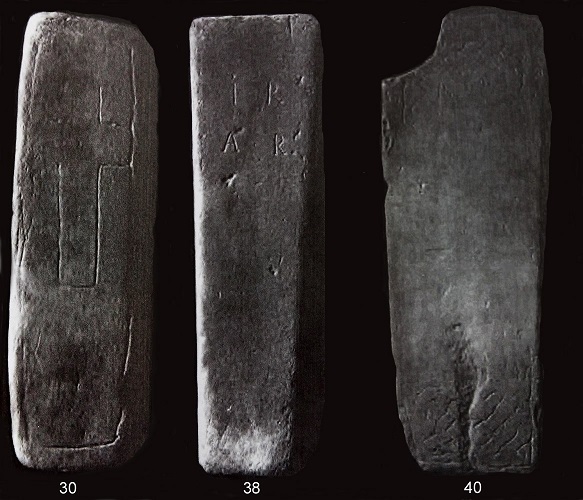 A major archaeological find at Govan has been causing quite a buzz in the past week or so. No doubt many of you will already be aware of the news from social media and other sources. The find is indeed exciting: three early medieval carved stones, long assumed to have been lost forever, have been rediscovered in the graveyard of the old parish church.

The discovery happened during a community archaeological project called Stones and Bones which is run by Northlight Heritage, a charity closely involved with the conservation of the church (known as ‘Govan Old’) and its collection of early medieval sculpture. The significance of the new find becomes clear when we look back at the long history of the Govan Stones.

The story begins a thousand years ago, in the Viking Age, when Govan was a centre of royal power in the kingdom of Strathclyde. In those days, the site of Govan Old was occupied by a church that served the spiritual needs of Strathclyde’s rulers – a powerful dynasty of Britons whose realm extended northward to Loch Lomond and southward across the Solway Firth. The kings with their families and other members of the local elite worshipped at Govan, burying their dead in the churchyard and marking the graves with elaborately carved stones. After the Scottish conquest of Strathclyde in the eleventh century, the line of local kings came to an end but the gravestones remained. In later times, when the old kingdom of the Britons was barely a memory, many of the stones were re-used by prosperous Govan families as memorials for their own deceased. Hence we see the initials of people who died in the seventeenth and eighteenth centuries inscribed on a number of stones, overlaying the Viking-Age carvings of crosses and interlace patterns. In the early nineteenth century, the churchyard still contained more than 40 ancient monuments. Most were recumbent cross-slabs, designed to lie flat over graves, but there were other types too, the most impressive being 5 hogbacks and (after its discovery in 1855) a magnificently carved sarcophagus.

In the late nineteenth century, Glasgow landowner and politician Sir John Stirling-Maxwell arranged for cast replicas to be made of the early medieval stones. These were then individually photographed, with the images being published by Sir John in 1899 under the title Sculptured Stones in the Kirkyard of Govan. Some years later, the sarcophagus was placed inside the church for safekeeping, to be followed in 1926 by many of the other stones. The rest remained outside. A plan of the churchyard, drawn in 1936 (see below), shows 19 stones lying in a line along the east wall. On the other side of the wall lay one of Govan’s famous shipyards. 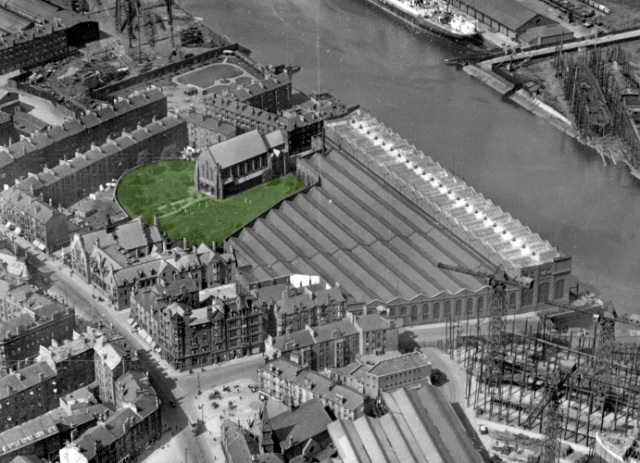 Aerial view of Govan in the 1930s, showing the churchyard (highlighted in green on this copy of the original), the River Clyde at upper right and the Harland & Wolff shipyard in the centre.

And so we come to one of the darkest chapters in the story of the Govan Stones. In the early 1900s, the shipyard erected huge sheds right up against the churchyard wall. These enormous buildings were demolished in 1973. Unfortunately, the demolition work brought debris crashing down on the ancient stones lying beside the wall. At the time, it was believed that nearly all of these precious monuments had been reduced to shattered fragments amongst the rubble. A few survived, though badly damaged, and are now inside the church.

Fast forward through four decades to 2019 and the Stones and Bones ‘community dig’. One of the dig’s local volunteers was Mark McGettigan, age 14, a pupil of Lourdes Secondary School in Cardonald. Mark was using a probe to search for objects buried beneath the surface near the eastern edge of the churchyard when he made a remarkable discovery:
“I was just prodding the ground to see if there was anything there and suddenly it made a noise and I realised I had hit something. Myself and two of the archaeologists worked out the area of the object and started to dig it out and clean it. I wasn’t too sure at the start what it was. But then we checked with the records and we realised it was one of the lost Govan Stones. I am extremely happy, in fact I’m ecstatic at what I helped to uncover.”

The stone turned out to be a cross-slab from the Viking Age, carved in the 10th or 11th century. Nor was it a lone discovery: another two slabs were also found. All three have been matched to their corresponding photographs in the Stirling Maxwell survey, published 120 years ago, and identified as ’30’, ’38’ and ’40’ according to Sir John’s classification of the Govan monuments. The composite image at the top of this blogpost shows the three photographs grouped together (by me) but in the original 1899 publication they appear on separate pages.

Conservation and analysis by specialists are the essential next steps for these important relics of Scotland’s ancient past before they can be put on public display. In the meantime, it is quite possible that other stones – hitherto thought to have been reduced to rubble – survived the disaster of 1973 and still await rediscovery. We shall see what happens in the coming months but these are certainly interesting times for Govan’s ancient heritage.

Below are some photographs of the new finds, reproduced here by kind permission of archaeologist Ingrid Shearer from Northlight Heritage.

Uncovering one of the three cross-slabs (Mark McGettigan kneeling at top right). 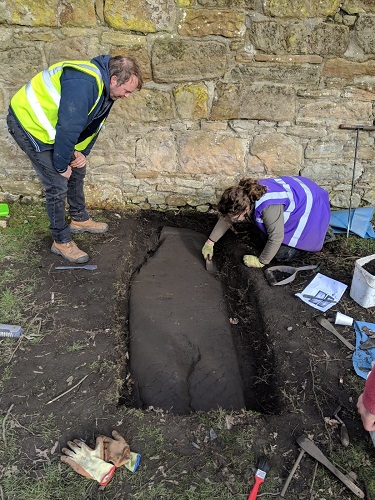 An early medieval masterpiece revealed (the stone shown as ‘No. 40’ in the picture at the top of this blogpost).

Photogrammetric recording by Dr Megan Kasten of the University of Glasgow.

Finally, a message for those of you who enjoy getting out and about to see Pictish stones and similar ancient stuff. If you haven’t yet visited the collection at Govan Old, you’re missing out on one of Britain’s premier ‘Dark Age’ attractions. The Govan Stones are an absolute must-see for anyone who has an interest in Viking-Age sculpture, Celtic art or Scotland’s early history. Govan was the capital of the kingdom of Strathclyde, the last realm of the Cumbri or Northern Britons. Hardly anyone seems to know about this kingdom, even though it was a major player on the turbulent political stage of the ninth to eleventh centuries. Its inhabitants are the most obscure, the most enigmatic of Scotland’s early peoples. If you think the Picts and their symbol-stones have an aura of mystery, see what you make of the Northern Britons and their hogbacks. Stepping inside Govan Old feels like entering the heart of a strange, forgotten realm that somehow got left out of the school history books. The exciting new discoveries by Mark McGettigan and his fellow community diggers have brought a little bit more of this long-lost kingdom into focus.

My thanks to Frazer Capie for telling me about the discovery and to Ingrid Shearer for letting me use the press release images and other media information.

The Govan Stones and the churchyard have Scheduled Monument status and are protected under the Ancient Monuments and Archaeological Areas Act 1979. The Stones and Bones community dig has scheduled monument consent from Historic Environment Scotland.

The Govan Heritage Trust is currently running a crowdfunding campaign to secure the future of the church and its rare collection of early medieval sculpture. Anyone wishing to support the Trust can contribute via this link.

Other useful Twitter accounts for news and updates about the latest discoveries:
Northlight Heritage
Love Archaeology
Dr Megan Kasten
Dr Kasten has produced a superb 3D image of one of the newly unearthed cross-slabs.

And, lastly, a couple of media reports, one from Scotland and one from the USA:
Lost Glasgow
New York Post