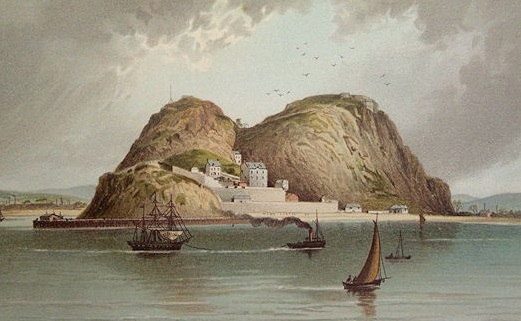 A number of medieval Welsh manuscripts contain information relating to the Cumbri or North Britons, the native Celtic people of Northern England and Southern Scotland. One of these is ‘Peniarth 47’, written in the 15th century and preserved at the National Library of Wales. It contains a collection of ‘triads’ – brief texts in which three items from the medieval storytelling tradition are grouped under a common theme. Triads were used by the bards of Wales as a kind of subject index to a huge repertoire of poems and stories originally retained in their own memories.

Some triads listed famous events, such as ‘Three Futile Battles of the Island of Britain’. Others listed military forces such as ‘Three Faithful Warbands’ or renowned individuals such as ‘Three Chieftains of Arthur’s Court’. One triad refers to a trio of notable young women:

Afan’s father Meic (sometimes spelled ‘Maig’) was reputedly a 6th-century ruler of Powys, a part of Wales bordering the territory of the Anglo-Saxons or English. Not much is known about him, although the district of Meigen in Powys might preserve his name.

Perwyr’s father Rhun is identified in Welsh tradition as a prince of the North Britons and as a son of the famous warrior-king Urien Rheged (active c.580). Contrary to popular belief, the precise location of Rheged is unknown. It is no more than a modern guess that the name refers to a kingdom rather than to a smaller territorial unit such as a river-valley or group of estates.

One of Urien’s contemporaries among the North Britons was Rhydderch, king of Alt Clut, whose epithet Hael means ‘Generous’. Alt Clut (‘Rock of Clyde’) is an old Welsh and North British name for the imposing, twin-peaked volcanic ‘plug’ where Dumbarton Castle stands today. Rhydderch reigned in the late 6th and early 7th centuries and is one of the most recognizable figures in medieval Welsh literature, a key player in the so-called North British Heroic Age. Peering behind his literary fame among later Welsh bards we are probably seeing a powerful king of the early medieval period, a competent warlord who launched plundering raids against his neighbours. His adversaries apparently included Anglo-Saxons, Scots and fellow-Britons. Among his network of high-level contacts were Saint Columba of Iona and, less certainly, Saint Kentigern of Glasgow. In later Welsh folklore Rhydderch emerges as an oppressor of Merlin during the latter’s time as a ‘Wild Man’ in the forest.

According to the triad of the Three Lively Maidens, Rhydderch had a daughter Angharad. Although we know very little about her, we cannot assume she was nothing more than a literary invention. It is entirely possible that she was a real princess of Dumbarton, a genuine historical figure like her father. Her epithet Ton Velen (‘Yellow Skin’ or ‘Yellow Wave’) denotes a defining physical characteristic and must have originated in a poem or story in which she featured. This tale, although now lost, was presumably well-known among the bards of medieval Wales and may have been circulating for a long time before it got ‘catalogued’ in the triad.

Some of the earliest and most famous examples of Welsh poetry and saga originated in what the bards called Yr Hen Ogledd, ‘The Old North’, the land of Urien Rheged and Rhydderch Hael. It is possible that the poem or tale featuring Angharad Ton Velen originated in this region rather than in Wales, either to praise her while she lived or as an elegy following her death. Such a tribute may have been composed by a bard at the royal court of Alt Clut, perhaps in the years around 600.

In the absence of additional information about Angharad we can do no more than sketch a hazy picture of her life.

Her name means ‘much loved’ and is pronounced ‘Ann-Harrad’ (stressed on the second syllable). Traditions of uncertain reliability, preserved at Glasgow Cathedral in the twelfth century, identify Rhydderch Hael’s wife as Languoreth, Queen of Alt Clut. This lady, who may have been a native of the Hamilton area, was presumably Angharad’s mother. The same traditions mention a son of Rhydderch called Constantine, who gave up the secular life to become a priest. He and Angharad are the only offspring credited to Rhydderch and, although neither is historically secure, they are not necessarily fictional. Constantine is the namesake of the mysterious saint commemorated in the dedication of the old parish church at Govan, 12 miles east of Dumbarton, and the two are perhaps one and the same.

Let us assume, for the moment, that Angharad existed. A tentative chronological guess would place her birth in the period 570-590. As a princess of Alt Clut she would have been a Christian like her father (and, no doubt, her mother too). During her early years, until she was old enough to marry, her time would have been divided between the old fortress on the summit of Clyde Rock and other royal residences visited by her father’s entourage. Displays of wealth and status were an important part of early medieval kingship and a royal daughter was expected to play her part. We can imagine Angharad wearing jewellery of gold and silver, and clothes woven from the finest fabrics. In her father’s feasting hall she would have eaten roast meat served in expensive bowls manufactured in France. The wine in her drinking-cup would have been imported from the Mediterranean lands. Servants and slaves would have been ever-present throughout her entire life.

Later Welsh bards regarded Angharad as a ‘lively maiden’ (whatever that means). A particular characteristic of her physical appearance was Ton Velen, for which we may envisage either a striking mane of curly blonde hair (‘Yellow Wave’) or an unusually sallow complexion (‘Yellow Skin’). The late Rachel Bromwich, to whom we owe a huge debt of gratitude for her magisterial study of the Welsh triads, interpreted Ton Velen as ‘Yellow (or tawny) Wave’, noting that ‘the reference may be to the girl’s hair’. This is reminiscent of the Gaelic word buide, which also means ‘yellow’, borne as an epithet by the Dál Riatan king Eochaid Buide (died 629) a son of Áedán mac Gabráin. Eochaid evidently received the epithet very early in life, for we find it being used by Columba when he greeted Áedán’s sons at a time when Eochaid was a small child. A number of sources suggest that Áedán fought at least one major battle against Angharad’s father Rhydderch.

Like Angharad, Eochaid is usually assumed to have had ‘yellow’ (i.e. blond) hair, but alternative interpretations of buide are possible. Eochaid and Angharad seem to have belonged to the same generation, and either or both may have had strikingly fair hair or, if ‘yellow’ is a reference to complexion, unusually sallow skin.

If Angharad survived the many perils of childhood to become a teenager she would probably have had little say in her future when the time came to choose a husband. As the daughter of a powerful king she was not only a lady of high status and considerable wealth but also a useful political commodity. Marriage to a prince of a foreign kingdom seems a likely scenario, the wedding perhaps putting a formal seal on a newly forged political alliance. Such a marriage would have taken the ‘lively maiden’ away from her lofty home on the Rock of Clyde, perhaps to a strange new land whose speech and customs she found totally unfamiliar.

In modern Britain, the most well-known bearer of the name Angharad was the Welsh actress Angharad Rees (1944-2012), who starred in the popular 1970s TV series Poldark.

Five years ago, Andrew Breeze suggested that ‘Languoreth’ might be an error for ‘Iunguoret’ (or ‘Unwared’ in Modern Welsh).
[See his article ‘Telleyr, Anguen, Gulath, and the Life of St Kentigern’ Scottish Language 27 (2008), 71-80.]

————————
This post is part of the Kingdom of Strathclyde series:

14 comments on “The lively maiden of Dumbarton”