Nigg cross-slab. Illustration from The Early Christian Monuments Of Scotland, 1903.

The old parish church at Nigg in Easter Ross probably stands on the site of an important Pictish monastery. The present building dates from the 1600s and is home to one of the most famous examples of Pictish sculpture: a magnificent cross-slab, 7 feet high, carved in the late eighth century. The slab’s decoration is very intricate. On the front face, above the cross, is a cameo showing Saint Paul and Saint Anthony receiving bread from a raven sent by God. The cross itself is surrounded by delicate interlace, swirling snakes and circular bosses. The back of the stone shows figures of humans and animals, with a Biblical scene (King David of Israel slaying a lion) and, at the top, an eagle above a mysterious ‘Pictish beast’. 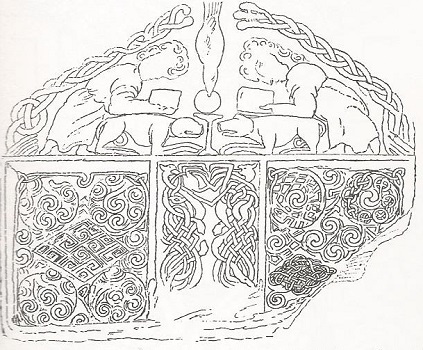 The slab has suffered considerable damage over the past 1200 years. It once stood near the entrance to the churchyard, until it was toppled by a storm in 1727. It was then re-positioned beside the church but, during a later move, it broke into three pieces. One piece – a narrow middle section containing part of the Pictish beast – was thrown away when the upper and lower pieces were joined together with metal staples. The discarded piece disappeared and was thought to be lost for ever.

A major project to conserve the slab was undertaken by Nigg Old Trust, the guardians of the church, who obtained funding for detailed restoration work by a stone conservator. The work was painstaking and time-consuming, because the monument had sustained so much damage in the past. The project also included a new display-area inside the church to enhance the experience for the many visitors who come to admire this masterpiece of Pictish art. This year, at the beginning of April, the restored slab was unveiled to the people of Nigg.

Nigg cross-slab. Drawing by C. Petley, from The Early Christian Monuments Of Scotland, 1903.

An interesting footnote to the project is the fate of the middle section which vanished when the slab shattered in the 18th century. In 1998, a fragment of this missing piece was discovered in a nearby stream by Niall Robertson (former editor of the Pictish Arts Society Journal). It has now been reunited with the rest of the monument. 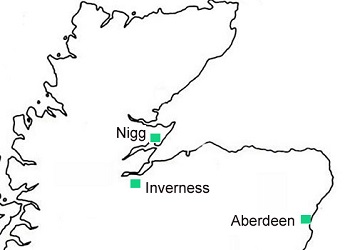 The website of Nigg Old Trust has information on the Pictish stone and the restoration project.

Site record for Nigg at the RCAHMS Canmore database

BBC news report from 10 April 2013 on the completed restoration