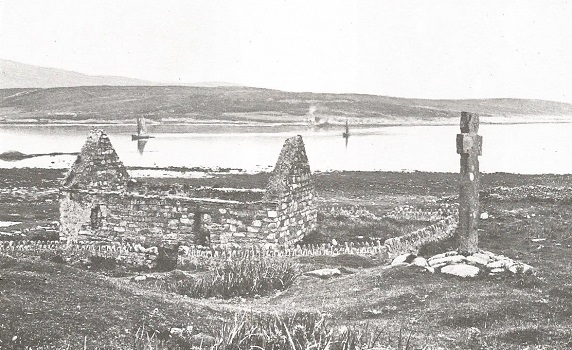 Ancient chapel and cross at Keills in Knapdale, beside Loch Sween. Photograph by Erskine Beveridge in The Early Christian Monuments of Scotland (1903).

A research project in the School of Humanities at the University of Glasgow has produced a fascinating online resource: a searchable database of hagiotoponyms in Scotland. Hagiotoponyms are place-names that commemorate saints. They are found all over the Scottish landscape as names of old parishes, medieval churches, holy wells and standing stones. Many of them give clues about the geography and chronology of the cults of saints. In some cases, the cult is localised to one small district or even to a single site. In others, the cult is linked to important religious or political changes that affected a very large area. The introduction of the cult of St Andrew, for example, was obviously significant in the evolution of a national ideology for the kingdom of Alba. On a regional level, the promotion of Mungo (Kentigern) as the patron saint of Glasgow seems to have played a role in the Gaelicisation of Strathclyde.

The original project was called Commemorations of Saints in Scottish Place-Names. It gathered information on a bewildering number of hagiotoponyms, ranging from the well-known (e.g. St Andrews) to the obscure (e.g. Exmagirdle). The project team clearly worked hard, for the resulting database is huge: 13000 place-names, 5000 places, 750 saints. I only wish it had been up and running a couple of years ago, when I was writing my book on Saint Columba. Back then, my main source of toponymic information was the ever-redoubtable CPNS (aka William Watson’s History of the Celtic Place-Names of Scotland) but an online resource would have been a useful quick-reference tool. Databases are always faster than printed book-indexes when you’re trying to work out which Kildonan is the one you really need.

The link below will take you straight to the database. Enjoy!

Terry O’Hagan wrote on this topic at the Vox Hiberionacum blog last month. Terry is a specialist on Early Irish Christianity, which means he knows a thing or two about Scotland as well. Follow him on Facebook and Twitter if you’re interested in Celtic saints.

In addition to the database, the project Commemorations of Saints in Scottish Place-Names has its own webpage at the University of Glasgow.

William Watson, The History of the Celtic Place-Names of Scotland (Edinburgh, 1926). This indispensable tool for students of early Scottish history is available as a paperback from Birlinn Books.

Birlinn is also the publisher of my book on Saint Columba. 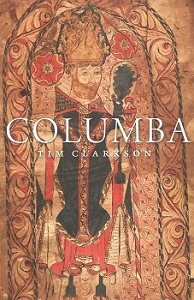 4 comments on “Saints in Scottish Place-Names”