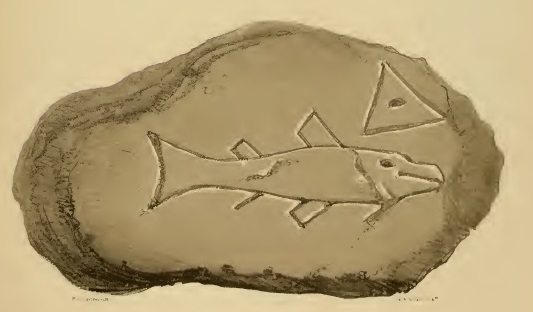 Fish symbol and triangle on a stone from Dunnicaer.

Archaeologists from the University of Aberdeen have recently discovered a Pictish fort on the summit of Dunnicaer, a ‘sea stack’ near Dunnottar Castle. Dunnicaer lies approximately 1 mile south of the town of Stonehaven but is isolated from the mainland at high tide. A number of stone fragments inscribed with Pictish symbols were found there in the nineteenth century, suggesting that it was a significant place in early medieval times. However, with steep slopes and rugged cliffs, it is hardly the most accessible archaeological site in Scotland – which is probably why it had never been excavated before. The Aberdeen team needed the guidance of a professional climber to help them get to the top.

Dunnottar Castle, situated a quarter of a mile further south, stands on a prominent headland jutting into the North Sea. Built in the twelfth century, it served as a stronghold for Clan Keith from the 1300s to the 1700s and was an important strategic site. References in medieval texts show its frequent involvement in warfare and dynastic politics. Older sources relating to the Dark Ages refer to a fortress called Dun Foither (the Gaelic name for Dunnottar). Contemporary annals state that this was besieged twice in the seventh century – in 681 and 694 – probably during wars between rival Pictish kings. It has long been assumed that the fortress in question stood on the headland now occupied by the castle. However, excavations conducted thirty years ago failed to reveal any evidence of Pictish settlement, prompting a suggestion that the original Dun Foither might instead be Dunnicaer.

[Above and below: two nineteenth-century views of Dunnottar Castle]

The recent excavation at Dunnicaer has now confirmed that this remote sea-stack was indeed the site of a small Pictish fortress. It was built sometime between c.400-600 and comprised a timber house or hall defended by an outer rampart of stone. Upon this defensive wall the symbol-inscribed stones discovered in the nineteenth century were probably displayed. It is also likely that the occupants devised a more convenient method of access than a scramble up the steep sides. They may, for example, have built a wooden bridge as a link to the mainland.

Archaeological finds – including charcoal from a hearth in the house – are now being anlaysed by experts. These may give clues about how, when and by whom the site was used. Was it perhaps the residence of an important local family, or some kind of military lookout post? 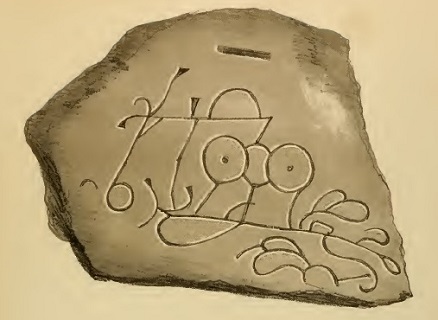 An ornate double-disc & Z-rod symbol on a stone from Dunnicaer.

These are a mixture of news items and database entries:

Thomson, A (1860) ‘Notice of sculptured stones found at “Dinnacair”, a rock in the sea, near Stonehaven’, Proceedings of the Society of Antiquaries of Scotland, vol. 3, pp. 69-75.

Alcock, Leslie & Alcock, Elizabeth (1992) ‘Reconnaissance excavations on Early Historic fortifications and other royal sites in Scotland, 1974-84; 5: A, Excavations & other fieldwork at Forteviot, Perthshire, 1981; B, Excavations at Urquhart Castle, Inverness-shire, 1983; C, Excavations at Dunnottar, Kincardineshire, 1984’, Proceedings of the Society of Antiquaries of Scotland, vol. 122, pp. 215–287.

[Both articles can be accessed via the PSAS online archive]

Note: The two symbol-stone illustrations shown in this blogpost are from John Stuart’s Sculptured Stones of Scotland (1856).

11 comments on “Picts at Dunnicaer”